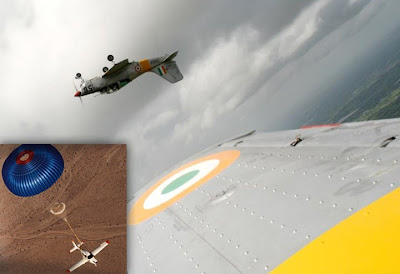 I'd reported here in March about HAL's plans to give the Indian Air Force's fleet of HPT-32 basic trainer aircraft parachute recovery systems. The fast-track tender was contracted today to BRS Aerospace, possibly the only company that bid. Excerpts from what the American firm put out today:

BRS Aerospace of South St. Paul, manufacturer of whole-airplane parachutes, announced it has been contracted to integrate and help certify its parachute recovery systems for the Hindustan Aeronautics Limited (HAL) HPT-32 basic training aircraft used by the Indian Air Force.

Frank Hoffmann, BRS Aerospace VP of Engineering, will travel to India immediately with a team of engineers to begin the process of adding the ballistic recovery system to the HPT-32 aircraft. "I anticipate being able to have a design ready this Fall," he says. Once BRS has completed their installation design, Hoffmann will work closely with HAL, the aircraft's manufacturer, and the Indian Air Force, to test and certify the customized whole-airframe parachute system. "The whole program is expected to be completed in a very short period of time," Hoffmann adds.

BRS Aerospace claims that its recovery systems have saved the lives of more than 255 people.

"This is a very significant milestone for not only BRS but for aviation safety as well," said Boris Popov, BRS founder and current VP of Public Affairs. "While BRS products have been successfully introduced into the civilian aviation markets for years, this is the first usage of the BRS system for the military trainer aircraft market..."