Huge news, and it's official. The DRDO/ADA announced earlier today in a statement that the GE F414 engine has been identified as the lowest bidder in the race against the Eurojet EJ200, to power the LCA Tejas Mk-II. This turns things completely around. In recent weeks, there had been a spate of source-based reports suggesting that the EJ200 had the more competitive tender, though there had been no confirmation.

But now, a formal statement from DRDO! Here it is in full:

The Price Negotiating Committee for the Alternate Engine for LCA Mk-2 has finalised the Comparative Statement of Tenders. The committee had its representations from Ministry of Defence, Defence Finance, ADA, DRDO, HAL, Indian Air Force, and Indian Navy. After evaluation and acceptance of the Technical offer provided by both Eurojet and GE Aviation, the commercial quotes were compared in detail and GE Aviation was declared as the lowest bidder. Further price negotiations and contract finalization will follow. 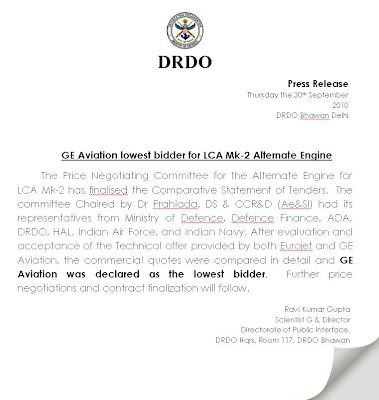 This is huge. The Aeronautical Development Agency (ADA) says it will now proceed with price negotiations. Several questions. The general buzz about Eurojet putting forward a more competitive commercial offer was pretty much an open secret. Even the figures that had been quoted in some reports (first in this one by Ajai Shukla) appeared to be accurate, at least according to a couple of reliable sources. Either way, I was also informed by the same sources that nothing was final, both engines seemed equally compliant in every respect, and that the evaluations of the tender proposals were still very much on. So what happened then?

MMRCA implications shouting loud: a body blow to Eurofighter. And a resounding boost for the Boeing F/A-18 and Saab Gripen IN! Eurojet is expected to make an official statement shortly. Stay tuned for details.