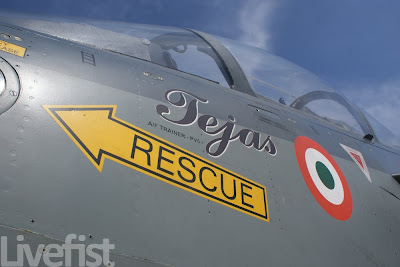 On a painfully sunny day at Bangalore's old HAL airport, India's Tejas light combat aircraft achieved initial operational clearance (IOC) today for induction into the Indian Air Force. With two aircraft to be delivered to the IAF in June and two more by December, the IAF for the first time has full access to the aircraft. But IAF chief Air Chief Marshal PV Naik was visibly more subdued than any of the others today, and despite the supposed sanctity of the ceremony (for some idiotic reason, an MLA and an MP were felicitated instead of the scientists), he chose to give voice to his irritation a few yards away from two Tejases gleaming in the sun -- a fighter and a trainer.
"There are some areas where work still needs to be done. There are aspects that need to be improved. We have agreed to a list of concessions for IOC. But we are sure that ADA will fulfil those by June, with full operational clearance in a couple of years. The refinements we are looking for include wake penetration tests, all weather clearance, lightning clearance, etc. Some parameters have only been partly tested. After all, we've waited a long time for the Tejas. We don't want a partial platform. We want everything fully operational," he said. As reported on Livefist earlier, other non-compliant parameters include speed at low altitudes and sustained turn rate.

Shortly after two Tejases roared into the sky for a quick flight display, Naik went on to describe the Tejas as a "MiG-21++" fighter, and went on to say, "At present it is not a fourth generation aircraft. It will come up, but at present it is not." He also indicated that the Tejas Mk-II would not only be powered by the F414 engine, but would incorporate airframe design changes and newer avionics. A statement issued today by ADA today said that the IAF had projected a need for 83 Tejas Mk-II aircraft (which would give the IAF a fleet of 123 aircraft in total -- far less than projected). The first flight of the Mk-II is scheduled for December 2014. Indigenous content on the Mk-II will be 75 per cent according to the HAL chief.

HAL chairman Ashok Nayak said that the company's capacity to churn out ten Tejas fighters a year could be ramped up if the need arose -- current capacity jointly shared by the Hawk and Tejas lines could be made into a dedicated Tejas line, he said. The unit cost of a Tejas will be between Rs 180-200 crore.

ADA said in a statement that the following would bridge the gap between initial and final operational clearance: integration of beyond visual range weapons, gun, rockets, guided and unguided bombs, and the further expansion of its flight envelope to -3.5 to 8G (-2 to 6G for IOC) and 24-degrees angle of attack (22 for IOC).