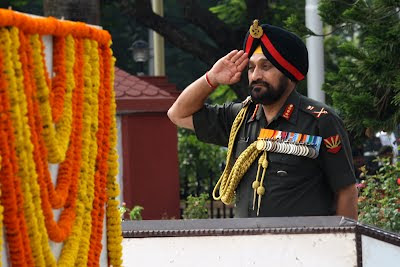 
General Bikram Singh PVSM UYSM AVSM SM VSM ADC assumes charge as the Chief of Army Staff today. It is no coincidence that the 25th Indian General to lead the world's second largest army is indeed one of the most decorated serving soldiers today. Commissioned on March 31, 1972, into the Sikh Light Infantry (SIKHLI) Regiment, his four-decades career in the uniform so far has been a continuing saga of 'aspiring for excellence'. His colleagues remember him as one of the bright cadets at the Indian Military Academy (IMA), where he held the appointment of Battalion Cadet Adjutant (BCA).

An astute military tactician and an ardent student of military strategy and operational art till date, he was awarded the J&K Rifles Gold Medal for 'Tactics and Leadership' and the 'Shriganesh Trophy' at IMA. The affable General Bikram - better known as 'Bikki' to his friends, began displaying his steely resolve and grit very early in his army carer. At the Infantry School during his Young Officer's course, he topped the course and was adjudged the 'Best Young Officer' and also awarded the prestigious 'Commando Dagger' for being the best commando along with 'Best in Tactics' trophy. These awards, remain the most coveted dream of every aspiring young officer.

It was during his tenure as an instructor at the Commando Wing of the Infantry School that Gen Bikram would find his life partner. Then, a young Captain, Bikram saw and briefly met his future wife-to-be, Surjeet Kaur - popularly known as 'Bubbles' in army circles, at a family wedding. He saw her, liked her and proposed to her. "It indeed was love at first sight," reminisces Gen Bikram. Respecting the custom and traditions, he sought the assistance of his sister and other family members who set up the match before his return to the Commando School after his leave. "Within a week, things were arranged and we got engaged. However, I was not happy with the marriage being fixed after six months. So, I called her up from Belgaum and told her to be prepared for marriage within a month. Of course, this required convincing parents and family members on both sides." True to his words, marriage done, Mrs Bubbles joined him at the Commando Wing of the Infantry School within the stated time-frame.

For the newly-wedded lady, it was an altogether new experience to be in a way of life that she had no prior association with. "During various demonstrations that used to be organised for the public, I ensured that Bubbles was present to see and appreciate our commando skills and techniques". He needn't have done any more, for Mrs Bubbles was more than just smitten by this young, handsome officer and his honest display of affection, albeit only commando-like.

"Bikki's friends ensured that for nearly a month-and-half I didn't have to cook any meal after I joined him. Either we were invited to a friend's house or they would send us meals at home," says Mrs Bubbles. Her tryst with the  army life began on a note of bonhomie and she has stood steadfast to the core values of the camaraderie that is the mainstay of life in the armed forces, army in particular. Today, Mrs Bubbles has an equally important role to play alongside Gen Bikram Singh, as President AWWA (Army Wives Welfare Association), in the days and years ahead.

The environs of South Block beckoned Gen Bikram on several occasions. After the 'Higher Command Course', he served his first tenure in the Military Operations (MO) Directorate. The tenure, as a Director, coincided with the Kargil war and the bright officer was singled out to brief the media on the daily progress of the conflict. Later, he was also made responsible for writing the official version of the war history. These were major responsibilities, which he fulfilled commendably.

He went on to serve four more important tenures at Army HQ which included one additional tenure in the MO Directorate as the Deputy Director General, thereafter, two tenures in the Perspective Planning Directorate, initially as the Deputy Director General of Perspective Planning (Strategy) and later, as the head of the Army's 'Think Tank' as the Additional Director General (the appointment now has since been upgraded to the post of Director General). He would later return to Army HQ as a Lieutenant General to serve as the Director General Staff Duties (DGSD) that facilitates the overall functioning of various branches of Army HQ, and serves as an interface with other government agencies besides looking at the Indian Army's training teams abroad and UN peacekeeping operations.

In between the 'Staff' roles, Gen Bikram Singh went on to command several other operational field formations. These include command of a Rashtriya Rifles Sector in South Kashmir, an Infantry Division in J&K and the prestigious 15 Corps at Srinagar. His tenure later as the Army Commander of Eastern Command was also marked by significant improvements in both the conventional and sub-conventional war-fighting arenas. In addition to the timely raisings of various field formations and infrastructure development, the internal security canvas in all the militancy inflicted states has shown a marked improvement. The General ensured that all counter-terrorism operations were synergised, people friendly, and launched on hard intelligence to obviate inconvenience to the locals. All actions of his troops, he demanded, must contribute to the groundswell for peace.

As a Brigadier, he was selected to attend the US Army War College, Pennsylvania, where besides excelling in academics he also won the International Toastmaster's award in public speaking.

His international forays with peace-keeping missions include two assignments with the United Nations in Central America (ONUCA and ONUSAL) and as the Deputy Force Commander and GOC of Eastern Division in the Democratic Republic of Congo. His division comprised contingents from 18 different countries including a brigade each from India and Pakistan, and battalions and companies from China, Bangladesh, Nepal, Uruguay, South Africa, Morocco, Senegal, Benin, and Tunisia amongst other countries. During his tenure in Congo, his division was instrumental in bring peace to the strife-torn eastern region and creating conditions for the consolidation of peace process.

Colleagues also remember him for being a 'soldier's soldier' for spending time and sweat with his troops on the ground. A shade of this was visible during the September 2011 earthquake in Sikkim when he visited all affected forward posts and even awarded commendation medals to soldiers and officers for exceptional service on the spot. Gifted with a razor-sharp memory for details, Gen Bikram is known to often surprise old friends - even those he has not met in decades - with references to their family members and memories of time spent together.

Gen Bikram studied at Punjab Public School, Nabha. An avid sportsman, cricket, athletics and hockey were his favourite games in school. Singing and painting were his other talents that also fetched him awards in school. "Classical songs and ghazals are my favourites," he reveals. "Jagjit Singh, Ghulam Ali and Pankaj Udhas are his favourites," adds Mrs Bubbles.

Gen Bikram was nearly destined to be a doctor as most of his teachers believed he would. He was an exceptional student of Zoology and Biology and always scored very high marks in these subjects. But the wars of 1962 and 1965 were to have a profound impact on his young mind to motivate him to join the NDA in 1968.  The medical fraternity's loss has been the Indian Army's gain. When asked whether he ever regrets the choice made, Gen Bikram says, "If I were ever to be born again, I would only join the Indian army" - words that would be echoed by only a highly motivated soldier, and that which would also inspire a generation of youth who aspire to be one like him.

The couple has two sons, Ramandeep and Kanwardeep.

In the last week of May, Gen Bikram Singh, while on a tour to various formations in north-east, shared few of his thoughts with Sainik Samachar (for issue June 1-15, 2012), the fortnightly journal of the armed forces. Some excerpts from what he spoke on various issues:

What are your priorities after taking over as the Army Chief?

My first priority is to ensure the operational readiness of the Army to enable it to fulfil its constitutional obligations and assigned roles effectively. Secondly, address the hollowness and ensure the modernisation process proceeds as per stipulated timelines. Thirdly, strengthen the Army's work culture and the core values, namely, Duty, Honour, Loyalty, Integrity, Respect and Selfless Service. Fourthly, focus on effective human resource management to ensure high standards of motivation and morale amongst all ranks. Fifthly, enhance 'jointness' with other services. Sixthly, ensure welfare of veterans, Veer Naris and widows. It is important that we care for these very valuable members of our fraternity as they constitute the very bedrock of our bigger Army family. All commanders must endeavour to create a climate during their command tenures that hinges on our cherished core values, professional ethos and is conducive for growth and cohesion.

Your thoughts on issues such as Siachen and AFSPA?

Look, I have had two stints each in the Military Operations and Perspective Planning directorates at the Army Headquarters and as such, I am fully conversant with these issues and the associated sensitivities and nuances. However, at this stage, I would not like to offer any comment on these issues as we (Army HQ) have already forwarded our views to the government and its now for the Govt to decide.

What are the Army Headquarters' views?

Our views are classified and therefore, I would not like to talk about these.

I am of the view that Army should get employed in internal security situations only as an instrument of last resort, consequent to the optimal employment of state police forces and Central Armed Police Forces (CAPF). It needs to be remembered that our prolonged employment in such situations impacts adversely on our conventional war fighting capabilities and therefore, is best avoided. We need to continue with added zeal and commitment the training of state police forces and CAPFs to give them the requisite prowess to effectively deal with the internal security situations.

What type of training is being imparted?

We are committed towards training and capability development of CAPFs. Till March this year, the Army had trained almost 70,000 CAPF and State Police personnel including 38 CAPF Battalions in counterinsurgency operations. Approximately 2700 personnel have been imparted counter IED training, 140 newly commissioned Assistant Commandants of various CAPFs have undergone six months attachment with Army battalions deployed in counterinsurgency operations in J&K and the North East and, another batch of 120 officers is presently undergoing attachment. Our endeavour is make these junior leaders proficient in effectively handling their sub units in sub conventional war fighting arena.

Our Army remains fully prepared to face and counter any external threat and deal with internal security challenges. Capability enhancement, as we all know is an ongoing process wherein, we have to ensure that initiatives aimed at modernisation, augmentation of combat power, infrastructure development, and joint-ness coupled with honing the individual and collective skills receive the desired attention at all levels.

What would be your message to your men?

We all belong to the Best Army of the world. To remain there, let us continue to strive for all-round excellence with added zeal and élan. Let us uphold our cherished core values so that we can continue to remain as one of the most potent, responsive, and accountable instruments of national power.

On this day I also wish to pay my sincere homage to all our gallant officers, JCOs and soldiers who have made supreme sacrifice in the line of duty. Jai Hind!