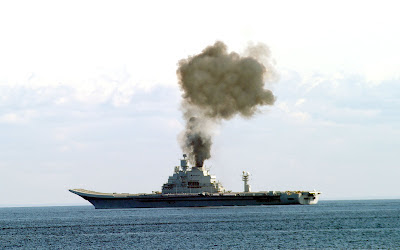 In the latest in what is by far the most monumentally botched procurement by the Indian government, the Indian Navy's refurbished Russian aircraft carrier Vikramaditya (formerly Admiral Gorshkov) has failed full-power trials in the Barents Sea, part of its full fledged sea trials phase that began in June.

Some of the 44,500-ton warship's eight boilers malfunctioned during the strenuous full-steam trials (funny, the ship was actually mothballed for sale after a boiler room incident two decades ago). The bad -- no, crushing -- news: the ship won't be commissioned into Indian service, as planned, on Dec 4, Navy Day this year. Also, there's every possibility that the latest failures will bring with them a financial cost to the Indian Navy. Since contracting, the deal price has increased almost by a factor of three.

Sources say the ship's inability to withstand a full power test puts it back by at least 10 months. That means she won't be in Indian hands, conservatively, before October 2013, just weeks short of the 10-year mark. The Indian government signed the Gorshkov refit deal in January 2004.

The deal goes into the books as perhaps one of India's most ill-conceived, mismanaged, vitiated and unlucky procurements ever. Can't wait for a national audit report on the procurement.