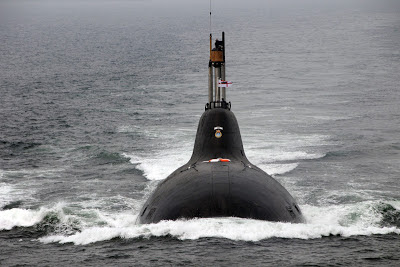 Excerpts from the Ministry of Defence Year End Review 2012.

AGNI-V – India proudly entered the exclusive club as the sixth country on 19 April 2012, when its Long-range Ballistic Missile took to sky on its maiden flight and reached the pre-designated target point over 5000 km away in the Indian Ocean with remarkable accuracy. The missile which was launched from Wheeler Island off Orissa Coast incorporates many indigenously developed technologies.  These include the composite rocket motor, state-of-the-art avionics, 5th generation 'On Board Computer' distributed architecture, highly accurate Ring Laser Gyro-based inertial navigation system (RINS), reliable redundant micro navigation system and the re-entry kit shield that withstands temperature with more than 4000 degree celsius ensuring that avionics function normally by maintaining an inside temperature less than 50 degrees celcius.

AGNI-IV – The 4000 km range nuclear capable ballistic missile Agni-IV was successfully flight tested on 19 Sep 2012.  The long-range missile propelled by composite rocket motor technology was tested for its cool capability.  Launched from road mobile launcher, it reached the predefined target in about 20 minutes.

With Agni-I, Agni-II, Agni-III and Prithvi P-II surface to surface missile and also its naval version Dhanush already in the arsenal of the Indian Armed Forces, the missile from the production lots were flight tested by the Armed Forces as part of training exercises to ensure defence preparedness. Thus, Agni-I, India's 700 km range ballistic missile had its flight tests on 13 July and 12 Dec 2012. The 2000 km range ballistice missile Agni-II and Agni-III with a range of 3000 km were test fired on 09 Aug and 21 Sept 2012 respectively. The 350 km range surface-to-surface strategic missile Prithvi (P-II) was successfully flight tested on 25 Aug and 04 Oct 2012 from ITR Chandipur, Odisha.  While its naval version Dhanush was test fired from a naval ship off the coast of Balasore, Odisha on 05 Oct 2012.  The tests were like textbook launches meeting all mission objectives and the missiles reached the target points with high accuracy. BrahMos Block III version with advanced guidance algorithm was flight tested on 28 Mar 2012 from ITR Balasore.  The missile flew through the designated 290 kms distance at Mach 2.8 and achieved high precision with steep dive.

DRDO has developed a two-layer Ballistic Missile Defence (BMD) capability against missiles with range upto 2000 km class. Both the exo and endo atmospheric interception have been demonstrated with direct hits leading to disintegration of target missile.

The Interceptor Missile AAD launched by the Scientists of DRDO on 23 Nov 2012 from Wheeler's Island, Odisha, successfully destroyed the incoming Ballistic Missile at an altitude of 15 Kms. The target missile, a modified version of Prithvi, mimicking the enemy's ballistic missile, was launched from Launch Complex III, Chandipur. Long Range Radar and MFC Radar located far away could detect the Missile from take-off and tracked it through its entire path. The total trajectory of the incoming Missile was continuously estimated by the guidance computer and subsequently the AAD Missile was launched at an appropriate time to counter and kill the ballistic missile.

In this mission, a special feature of intercepting multiple target with multiple interceptor was demonstrated successfully. The complete Radar Systems, Communication Networks, Launch Computers, Target update Systems and state of the art Avionics have been completely proven in this Mission.

LONG RANGE SURFACE-TO-AIR MISSILE (LRSAM) - Control and Navigation Tests (CNT) for LRSAM, a joint development Programme between DRDO and Israel Aerospace Industry (IAI), to develop an Advanced Naval Air Defence System for Indian Navy) were conducted on 16th and 18th July 2012. All Planned mission objectives were fully met in both the tests. The missiles showed good navigation and control performance. DRDO is the Prime Development Agency and IAI the design authority for supply, installation and final acceptance.

LIGHT COMBAT AIRCRAFT–NAVY (LCA-Navy) - had its first flight on 27th April 2012 followed by flights during month of Jun/Jul 2012. Initial Operation Clearance of this aircraft is expected by Dec 2014. LCA, country's first indigenous modern Light Combat Aircraft with four variants (air force, Navy and their trainer versions), is a precision weapon launch platform to carry a range of Air to Air missile, unguided rockets and bombs.  The aircraft is integrated with advanced cockpit, digital avionics and weapons interface, to provide effective point and shoot capability with quick turnaround time.  A Shore based Test facility (SBTF); one of its kind in Asia and third in the world; developed by DRDO at Naval Air Station INS Hansa, Goa is now ready for use. Besides testing of LCA-Navy, the test facility will also be used for training of pilots on LCA - Navy and MiG29K aircraft.

UNMANNED AERIAL VEHICLES (UAVs) - There have been significant achievements in the field of UAVs.  NISHANT, with its ground control system has been made ready for the Army after confirmatory trials.  An indigenous Wankel rotary engine has been developed by DRDO jointly with NAL, Bangalore, for powering UAVs like NISHANT. Rotary engine technology, especially suited for such applications, is the first of its kind in India.  Orders for Lakshya II pilotless target aircraft; capable of flying in sea skimming mode and tree top heights; are expected from the Services after successful demonstration to them. Similarly, UAV Rustom-I, a forerunner to Mediun Altitude Long Range (MALE) UAV Rustom-2, had series of successful trials. Indigenously designed  and  developed  RUSTOM-1 underwent series of successful test flights.  This UAV has the potential to be used for military missions like Reconnaissance, Surveillance, Target Acquisition, Target Designation, Communications Relay, Battle Damage Assessment and Signal  Intelligence.  A mini UAV -'NETRA', especially suited for Low intensity conflict operations was inducted by the Central Reserve Police Force (CRPF). 'NETRA' has four high speed propellers allowing it to take off and land vertically. Similarly a fixed wing mini UAV for low intensity conflict was demonstrated to security forces at various locations for surveillance within the range of 10 kms. It is also useful in reconnaissance over hills.

ELECTRONIC WARFARE - There has been a significant achievement in the Electronic Warfare Area which includes integration and testing of country's first indigenous active array radar, operationalisation of Combat Information Decision Support System (CIDSS) and development and testing of laser based ordnance Disposal System and advanced Laser Guided Bomb Tester.  The initial development of Indira-1, a short range 2D system has now been extended to high power 3D system like 3D Central Acquisition Radar and Weapon Locating Radar (WLR) based on phased array.  The DRDOs radar warning receivers have been selected to upgrade most of Indian Air Force aircrafts like MiG 21, MiG 29, SU 30MKI, MiG 27 and Jaguars.

Mi-17 V5 helicopter was inducted into the Indian Air Force (IAF) on 17 February 2012. This helicopter falls in the category of armed helicopter, with substantial and effective firepower with the latest and more powerful engines that will greatly enhance its payload carriage capability at higher altitudes. Mi-17 V5,  an upgrade of Mi-17 in the medium-lift category, is equipped with  state-of-the-art avionics and on-board Navigation Systems.  It is a glass cockpit variant; the first of its kind to get inducted into the IAF.  It has onboard weather radar, state of the art autopilot and is compatible with the latest Generation (Gen-III) Night vision Goggles.  With this, the helicopter can undertake all-weather, day and night operations in any kind of terrain. The helicopter is also equipped with a Bambi-Bucket that can be used for fire fighting.  It is also fitted with a powerful winch–a feature useful in the Disaster Relief Operations in restricted areas where landing is not possible.

Indian Navy inducted INS Chakra to its under water fleet on 04th April 2012 at Vishakhapatnam.  Defence Minister Shri AK Antony inducted the submarine into the fleet of Eastern Naval Command.  This four plus generation Russian origin submarine is capable of fulfilling multiple roles and will go a long way in strengthening Navy's blue water operating capability.

The third of the follow-on class indigenous stealth frigate INS Sahyadri was commissioned on 21 July 2012 at Mazagaon Dock Limited, Mumbai by the Defence Minister Shri AK Antony. Conceived and designed by Indian Navy Design Team this Shivalik class frigate will be mainstay frigate of the Navy in the 21st Century.

The First and Second of the three Talwar-class stealth frigates Teg and Tarkash constructed at Yantar Shipyard, Kalinigrad Russia were inducted into Indian Navy on 27 April and 09 November 2012 respectively by the Flag Officer Commanding-in-Chief, Southern Naval Command.  These multi-role stealth frigate with advanced combat suits are fitted with formidable array of weapons and sensors onboard the Ship including the super-sonic BrahMos missile system and advance surface-to-air missile system.

To provide a boost to coastal security Indian Coast Guard Ship H-187, the first of the series of twelve Air Cushion Vehicles (ACVs), was commissioned at Okha on 11 June 2012 by Vice Admiral MP Muralidharan, DG Coast Guard.  The 21 meter long ACV (hovercraft) designed and built by Griffen Haverwork Limited (GHL), UK displaces 31 tonnes and can achieve a maximum speed of 45 knots.  The ACV is capable of undertaking multi-farious tasks such as surveillance, interdiction, search and rescue  and responding assistance to small boats / crafts in distress at Sea.

Indian Coast Guard Ship 'Samudra Paheredar', the second of the series of three Pollution Control Vessels (PCVs) being built by M/s ABG Shipyard, Surat was commissioned by Admiral Nirmal Verma, the then Chief of the Naval Staff in July 2012. The 95m long indigenous PCV displaces 4300 tonnes and can achieve a maximum speed of 20.5 knots with an endurance of 6500 nautical miles. The ship's primary role is pollution response at sea and is equipped with the most advanced and sophisticated pollution response and control equipment for mitigating oil spills, which include containment equipment like hi-sprint booms and river booms, recovery devices like skimmers and side sweeping arms. The ship is capable of unhindered oil recovery operations with storage tank capacity of 500 KL in addition to inflatable barges. The ship is installed with modern Integrated Platform Management System and Power Management System, which makes it unique for unmanned machinery operations. It is also fitted with Dynamic Positioning System for fire fighting and pollution response operations and an infra-red surveillance system for night surveillance.

The Indian Coast Guard Ship Rani Abbakka, the 1st of a series of five Inshore Patrol Vessel (IPV) built at M/s HSL, was commissioned at Visakhapatnam by the then Minister of State for Defence Dr. MM Pallam Raju, on 20 Jan 2012. The 50 meter indigenous IPV displaces 300 tonnes and can achieve a maximum speed of 31.5 Knots with an endurance of 1500 nautical miles. The special features of the ship include an Integrated Bridge System (IBS), Machinery Control System (IMCS), and an indigenously built Gun Mount with Fire Control System. The ship is designed to carry one Rigid Inflatable Boat and two Geminis for Search and Rescue, Law Enforcement and Maritime Patrol.