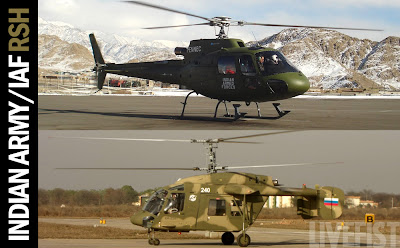 At Aero India 2011, Eurocopter displayed the AS 550 C3 Fennec, its contender for the Indian Army / IAF reconnaissance and surveillance helicopter (RSH) competition. This year,  its competitor Kamov will display the Ka-226T Sergei, according to that press release.

The timeline of this competition so far provides a better sense of just how delayed it is:

Last checked, the MoD hasn't opened commercial offers yet, and a decision remains pending. Last month, the two contenders -- Kamov and Eurocopter -- were asked to renew their commercial offers for a record fourth time.

The Army is reported to have appealed to the MoD for the fourth time recently to speed up the process and make a decision. MoD sources suggest that inquiries into alleged corrupt practices in a separate deal for AgustaWestland VVIP helicopters (deliveries of which have begun) have slowed a decision on the 197 copter bid.