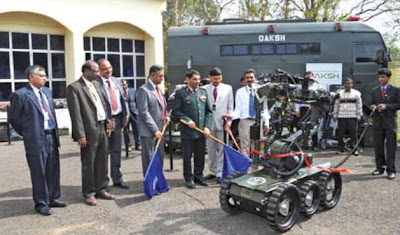 DRDO Newsletter Text: The first batch of five remotely operated vehicle (ROV) Daksh, designed and developed by Research and Development Establishment (Engineers) [R&DE (E)], Pune, was handed over to Maj Gen Rakesh Bassi, Director General Combat Engineers, by the DRDO's S Sundaresh, in a flagging off ceremony held on 19 December 2011 at R&DE (E). A limited-series-production order for 20 Daksh has been placed by the Indian Army after extensive trials, testing and acceptance.

Daksh, a state-of-the-art ROV, will be an invaluable asset for Bomb Disposal Units of the Army, Police and Paramilitary Forces for handling improvised explosive devices (IEDs) and hazardous objects. It is the first indigenously developed unmanned vehicle or mobile-robot in the country Maj Gen Bassi said that it is an excellent effort made by DRDO and congratulated the Robotics Group of R&DE (E) for their tireless efforts. He added that the users will exploit the full potential of the system.The technology has been transferred for production to three firms, viz., M/s Dynalog (I) Ltd, M/s Theta Controls and M/s Bharat Electronics Ltd.